Like many experienced Access users, I abandoned split forms a long time ago as I found them difficult to adapt if you want to modify them in any way.

Attached is a very simple application to show how it works.

Many thanks are due to the following members of Access World Forums for contributing to various stages in the development of the project:

Like the 'real' split form, the emulated split form (ESF) has a single form section at the top with a contnuous form at the bottom. However unlike the real split form, the data can be filtered as well as sorted.

My colleague Salvo Fricano (santifrichi) contacted me a few days ago with a suggested enhancement to the emulated split form. The idea was to allow users to switch between 3 modes: split form / datasheet only / single form only (see screenshots)

I thought it was a useful improvement and have attached my version of this.

Salvo has done the same thing using a class module and that will hopefully be ready for posting in the near future. The advantage of the class module approach done by my colleague is of course transferability of code.

We have agreed to post both versions so members can compare/contrast the code and choose whichever they prefer.

Many thanks to santifrichi for this suggestion 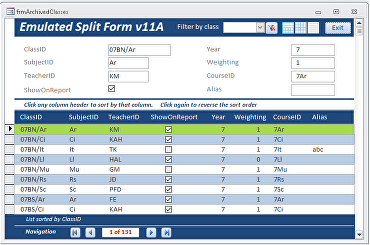 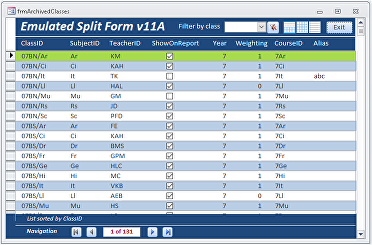