A common issue for many database users is the need to convert databases which were created in very old versions of Access that are no longer supported.

For example, this question was asked by Deecee at Access Forums.net:

I'm working on getting my Access 2 db into 2016. I have 2000, It successfully imported my tables, queries and macros, which I can then get into 2016, but it won't import any of my forms and reports. I've tried the conversion thing, but that won't work at all. If I could get the forms and reports in, even if they're broken, it would make my job a lot easier. Any ideas?

I'm very much an amateur, but I put this together for my business in 95, and it's served me well since then.

The solution normally involves doing more than one conversion

In this case, the supplied file was the FE of a split database containing the following items: 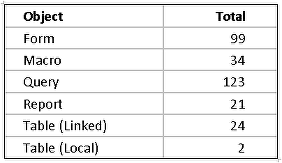 It was possible to convert the file relatively easily as follows:

a)  Opened in Access 2.0 to confirm that was the MDB file format

b)  Reopened in Access 2000 and converted the MDB format

c)  Reopened in Access 2010 and converted to ACCDB - removed the utility.mda reference which doesn't exist in ACCDB files

The conversion process took just under an hour to complete

Once I re-attached the tables it worked perfectly.

You saved me days of work. Thanks again.

We can provide this conversion service for clients as we own all versions from Access 1.0 (released 1992) through to the current version Access 2019 (365).

At the end of the process, your database should look and behave exactly like the original but work correctly in your specified version of Access.

1.  You must have the rights to use the supplied file(s)

3.  If the files are password protected, the passwords MUST be provided

4.  If the data is sensitive, tables should be emptied (or the contents replaced with ‘dummy’ data)

5.  If the databases are split, the backend file(s) should also be supplied

6.  If the files include workgroup/user level security (ULS), details must be provided so the files can be opened

7.  Items no longer supported by Access will NOT be converted e.g. pivot tables/charts are not supported in Access 2013 or later

Many old Access files will be relatively straightforward to convert.

If there are any complications, clients will be advised of the likely cost before proceeding.

For example, if the update requires converting files to work in 64-bit versions of Access, this will normally involve additional work.

As a result, a higher price will be charged.

The conversion service is NOT intended to fix existing design/coding errors in client databases.

At the end of the process you will need to fix any such errors yourself in the updated version.

Examples include the use of themed controls on reports, multivalue fields, attachment fields.

However, it may be more cost effective to just supply affected users with a runtime version of Access that matches your database

For further details of the conversion service, please email [email protected] with details of your file(s)

A secure location will be made available for file transfer