Some of these methods can be used to help make a database more secure.

The database is opened with a form 'floating independently' on the desktop i.e. with the access application window hidden

Buttons on the form can be used to:

a)   drag a borderless form to a new position

g)   open another form with a related report.

i)    open a split form with the application window hidden

Although it is highly unlikely that any single application would need to use all of these features, this is designed to show that all items can be toggled on / off independently without problems.

All code has been fully tested in Access 2010 & 365 (32-bit & 64-bit) and has been widely used in various production databases for several years.

The code used can be found in the modules:

Some of the code is widely known e.g. hide navigation pane / ribbon.

Other parts are written by myself or other authors. Where appropriate, those authors have been acknowledged.

If you wish to use any of the code in your own projects, just copy the relevant module code including all author information as supplied.

Here are several more variations which were suggested by various Access forum members but which may be useful to others. Each should work in both 32-bit & 64-bit Access

The OP wanted the application window to be retained but with the title bar only - no nav pane or ribbons:

i) This approach works best with overlapping windows.

ii) The form MUST be a popup

This was written in response to a very old thread at Access World Forums where AWF member tonyluke had  issues using modal forms when the application window was hidden. As stated in that thread, doing an action such as transfer database with

a modal form running will make the navigation pane visible if it was hidden.

For most purposes, this is useful behaviour so you can check if the action has worked

But where you need it to remain hidden, you can use code to hide the nav pane again immediately

The BE just has a dummy table to test for linking

Click the button again to delete the linked table

The OP wanted all buttons removed from the title bar in order to control Access closedown via code only.

i) This approach only works with overlapping windows.

ii) The form MUST be a popup with NO control box, close, max/min buttons

iii) To remove the title bar as well, set form border style to None

In addition, he wanted to know how to do other actions such as log off or shut down the PC completely using VBA for which I supplied the following code. Place it in a standard module 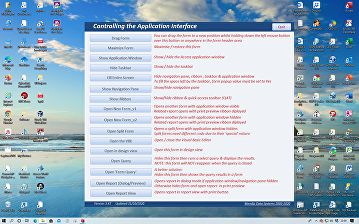 ' This code was originally written by Dev Ashish.

' It is not to be altered or distributed,

' except as part of an application.

' You are free to use it in any application,

(ByVal hWnd As LongPtr, ByVal nCmdShow As Long) As Long

(ByVal hWnd As LongPtr, ByVal nIndex As Long) As Long

(ByVal hWnd As Long, ByVal nCmdShow As Long) As Long

(ByVal hWnd As Long, ByVal nIndex As Long) As Long

(ByVal hWnd As Long) As Long

On Error Resume Next

The simplest method of hiding the application interface is to use the following code in the Form_Load event of your forms. The code includes error handling (this is strongly recommended for all procedures)

This code works well except for one important issue.

If a user clicks on the Access icon in the taskbar, the application interface is restored.

You can see this in action in the form frmFormQuery supplied with the example app.

Whilst it is possible to remove the taskbasr icon, there is a better approach

To overcome this, I now recommend using the following code in the Form_Load event.

'omit the ...Or WS_EX_APPWINDOW ...section to hide the taskbar icon

The code above is used the forms frmStart and frmAccessErrorCodes in the example app.

The code works perfectly for all types of Access form except the special case of an Access split form.

Split forms are actually a single form with some backstage 'trickery' used to also show a datasheet view.

'need to use GetParent(Me.Hwnd) for split form to prevent taskbar icon being hidden

As an alternative to the built-in split form, you could instead use the Emulated Split Form which can be treated like any other standard Access form when hiding the application interface

Reports cannot be managed in the same way as forms. For example, users need a way of printing the report

The application includes several methods of displaying reports in this situation.

close. Doing this gives additional functionality including the option to save as PDF (etc).

Borderless forms work particularly well for a clean interface when the Access application window is hidden.

However as borderless forms have no title bar, they cannot normally be moved on the screen.

The example app includes code to solve this by dragging the form with the left mouse button held down.

'API to move a form with a mouse down event

To use this API code, add code to the mouse down event in the form header and/or a command button.

The following code is included in the main form frmStart in the example application.